The Cross River State Government security outfit “Operation Okpakwu” has demolished a hotel that allegedly served as a hideout for suspected kidnappers.

The ‘Save side hotel’ located at 8 Miles area in Calabar Municipality was allegedly harbouring a notorious kidnapper identified simply as “Kingsley” and his gang members, who have been terrorising the state.

Speaking after the demolition exercise on Saturday, January 23, the State Security Adviser, South, to Governor Ben Ayade, Mr Henry Okokon, alleged that most of the robbery and kidnap cases that were carried out by the late Kingsley were planned and coordinated from the hotel. 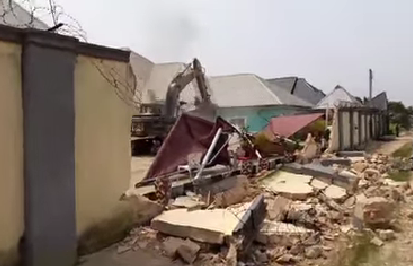 According to Okokon, the Homeland Security bill which was signed into law by Governor Ayade clearly stated that “anybody who aids, abets and harbours a criminal is also guilty of the crime.”

“The demolition exercise is an ongoing process, it is part of the activities of Operation Akpakwu that was set up to fight criminality in the state, especially kidnapping. The governor had warned landlords who are harbouring criminals to desist from doing so. Therefore, anybody found to be harbouring, abetting, or aiding crime, must definitely be held responsible,” said Okokon.

“This hotel is one of the buildings that have been harbouring criminals and the government has decided to bring it down.”

He warned landlords and hotel owners to always do a thorough background check of their guests and tenants before giving them accommodation spaces.

“This is a warning signal to all, and I think everybody should be aware of this. The general public should be aware that security is everyone’s business. I want to state that all legal procedures were taken before this building was demolished. The police have equally done their investigation, that is why we have the Army, Navy, and Air Force personnel here on the ground.” he added.

During the process of the demolition, residents who live near the hotel said they feel safer knowing that the building had been brought down, adding that the road in front of the hotel was not used by passersby due to the harassment by the late Kingsley and his gang.

Watch a video of the demolition exercise below;

Schoolboy, 15, said goodbye to his friends on Snapchat before hanging himself after struggling...

Celebration
A bride's strapless wedding dress has gone viral for all the wrong reasons on Facebook. The bride's gown put her bright yellow tattoos on...